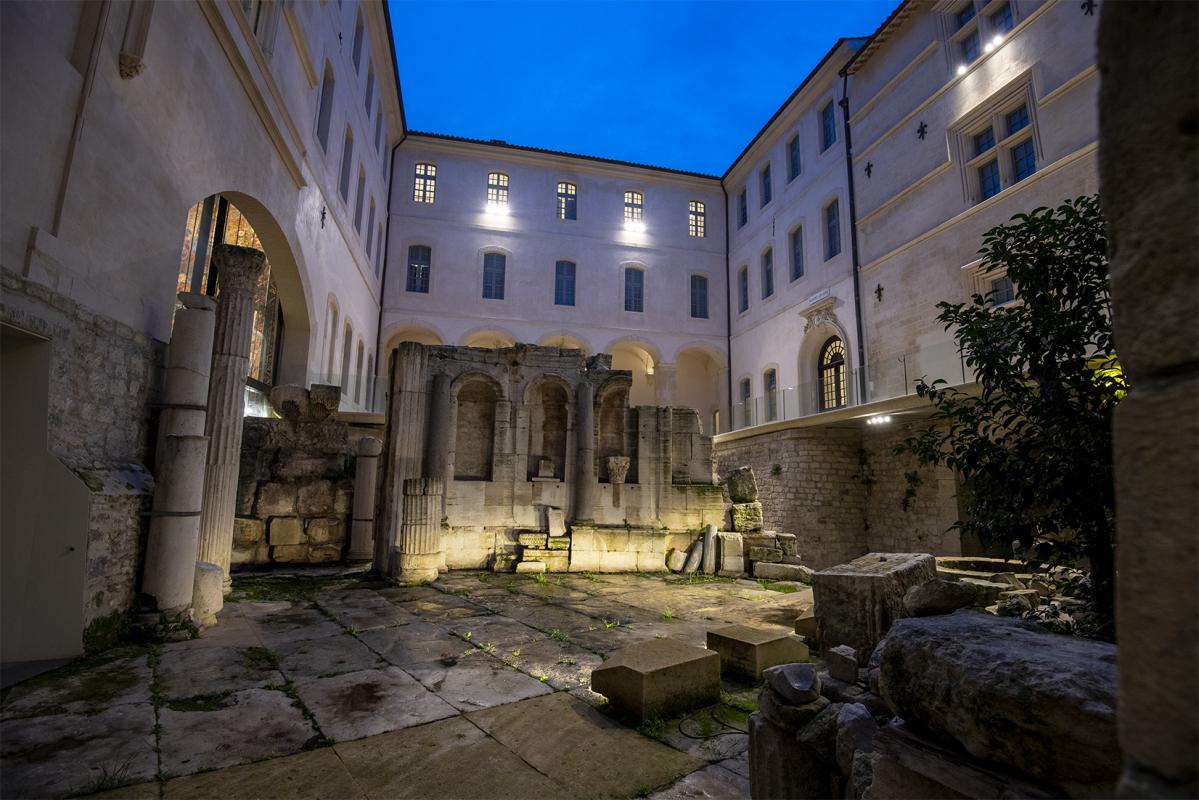 Chapeau
“When you stand at the foot of the ruins of the ancient Roman forum and look up to the sky, you feel like you are travelling through nearly the entire architectural history of Provence, from Antiquity to the 19th century.”
Michel Bertreux
Project Manager for the renovation of the Museon Arlaten 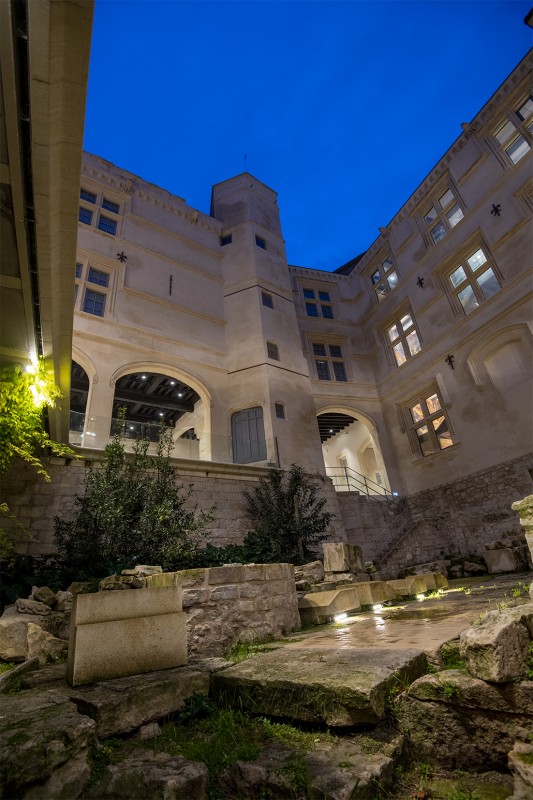 The museum’s history, a historical novel

Before it was a museum, the site experienced a whole series of uses and transformations. The oldest visible part, located in the inner courtyard, is a collection of Roman ruins. This would have been a forum adiectum, an added forum, which supplemented the group of monuments formed by the Augustan Forum, built in the 1st century A.D.

Between 1505 and 1515, a large residence was built on these ruins by Honorat II de Castellane, the son of a powerful Provençal family, whose father was Master of the Household for King René. Known as the Laval mansion, this fortified house had three wings, two of which are still standing today, around a courtyard with a well. The architecture is in the southern late Gothic style which was very fashionable at the time, featuring characteristic elements such as cross-windows and gargoyles...

In the mid-17th century, the Jesuit order bought and invested in the old Laval mansion, establishing a boys’ school by creating a wing to the south and a chapel to the north. Successive extensions in the 17th and 18th centuries changed the neighbourhood’s environment by annexing buildings and alleyways. The adjoining chapel was largely financed by donations. The current wooden vault replaced a initial ceiling and bears the coats of arms of the donors of 1737. 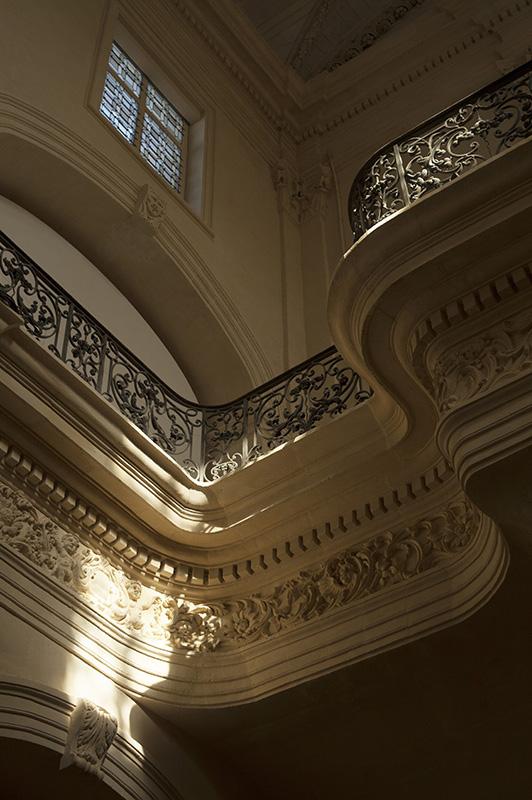 In 1763, the Jesuits were expelled from Provence and the school, now municipal, went into decline. Used as a prison and meeting place during the Revolution, it reopened in 1804 and operated at least under the Empire. Reorganised and placed under the direction of the University, it welcomed around one hundred students in around 1830, but collapsed once again in the mid-19th century.

In 1855, the courtyard was extended by knocking down the dilapidated east wing of the Laval mansion and replacing it with a new building inspired by the two medieval wings still standing, making the Museon Arlaten the only example of neo-Gothic architecture in Arles.

In 1904, the Nobel Prize for Literature was awarded to the poet from Maillane, Frédéric Mistral for his entire works, with the financial recompense related to this honour. He used this money to suggest to the municipality, which owned the school, to transform it to house the Museon Arlaten which was then based in a several buildings further along the street and running out of space. The Municipal Council made the building available to the the committee created to restore it. The museum then became the headquarters of the Félibrige and its architecture was enhanced by a pediment bearing the inscription “Palais du Félibrige”, a seven-pointed star and a portrait of an Arles woman.

The original idea of the grand staircase was to be able to move from the courtyard to the attic, because a museum is also a big house to be explored. It was built in the “Véran wing” [the museum’s east wing, the interior of which is not protected as a Historical Monument, ed.], as an extension of what Auguste Véran (1839-1927), the first architect of historical monuments to intervene, had created there, under the direction of Frédéric Mistral. Indeed, he had wanted to remove the floor of the first floor of the Véran wing in order to showcase the ruins of the ancient Roman forum. We have removed all the floors and connected the different levels using inclines and walkways. In designing this staircase, we have added a “Piranesian” effect, with the notions of loss of bearings, dizziness and a three-dimensional labyrinthine aspect which reinforces the idea of the overlapping of the historical layers.

The glass walls of the floors are illustrated and, even before visitors enter the rooms, demonstrate the graphic wealth in the museum’s collections, enabling visitors to form a mental picture in anticipation of the objects to be discovered.” 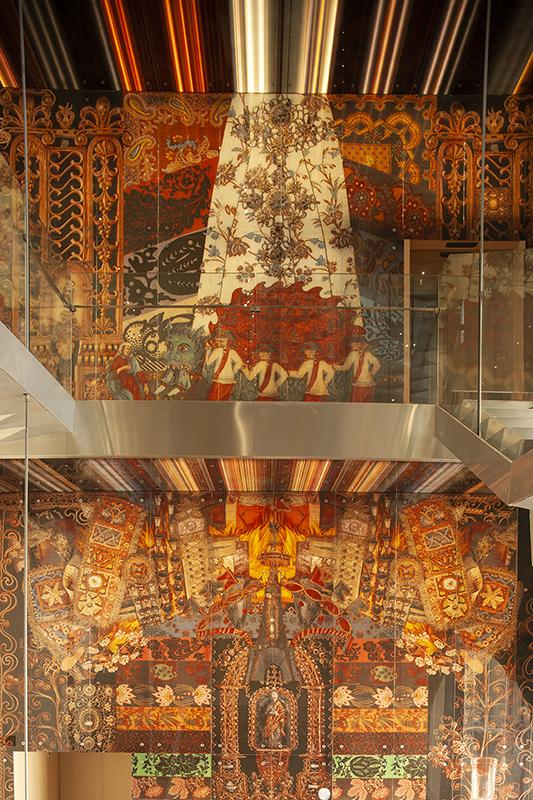 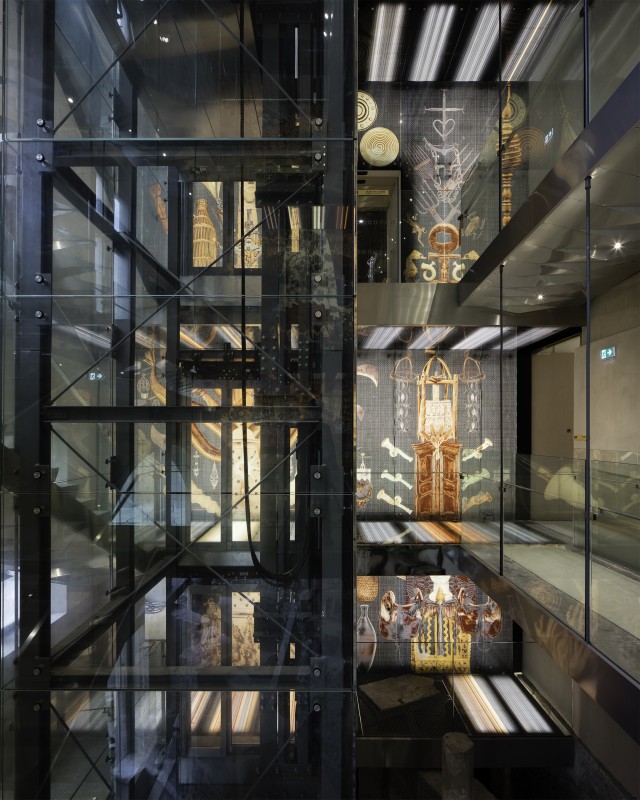 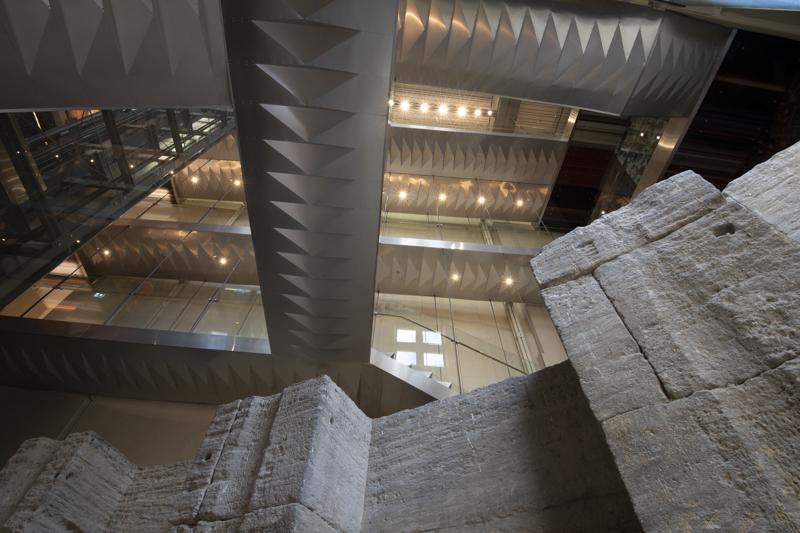 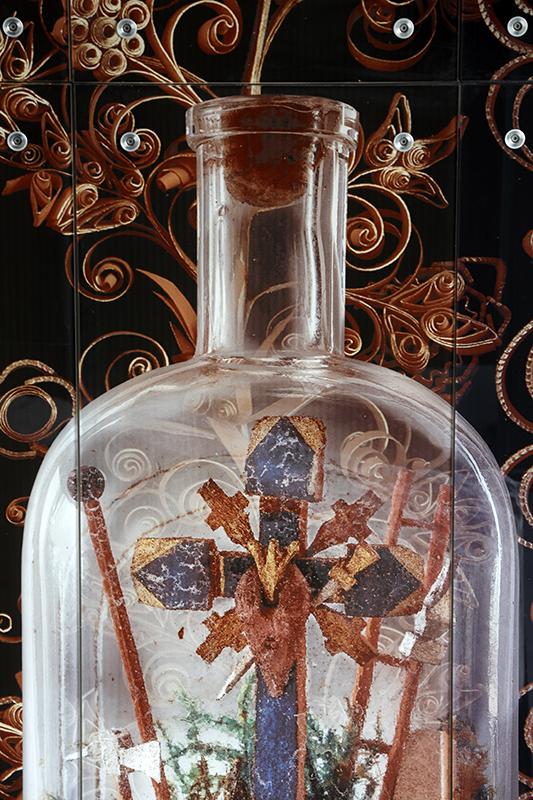 Monsieur Christian Lacroix : “A gesture of gratitude and love” 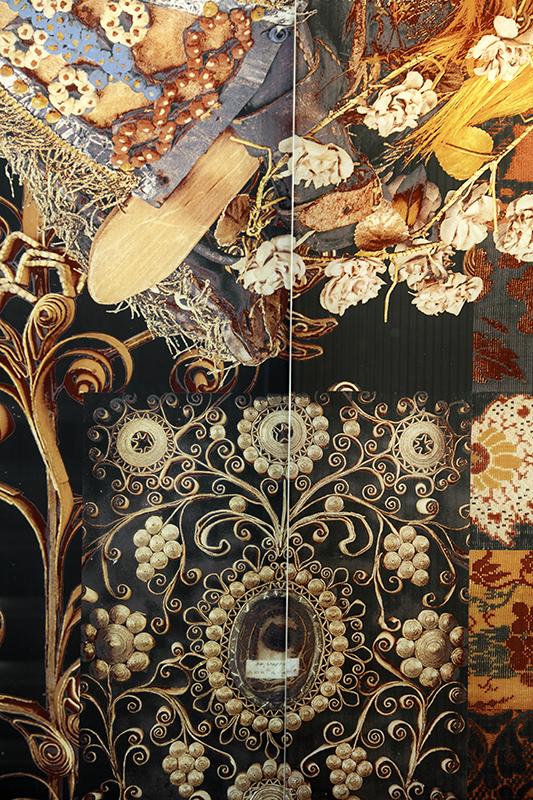 Once again, we will be able to walk around the Museon Arlaten, a brand new Museon which is, however, more authentic than ever and ever more faithful to its origins. Simultaneous resurrection and rebirth - “palingenesia” nicely put with a hint of outdated boorishness! I was made to take this route as a child on certain Thursdays or Sundays, it was a gift that I would instigate, triggering the promise, even if I turned this wish into a whim. It was “more” than going to church, better than going to school, it was equal to a theatre trip, Christmas all year round, immersing myself in the history of the two worlds of Provence and the Camargue which, alternately, were a backdrop to my childhood.

Two distinct and dissimilar planets, so close but so remote, the mysteries and phantasmagorias of which were revealed to me there, in display cases and frames. So many puzzles, clues, secret signs and artefacts that were the story of me, and those who came before me, who will always intrigue me, their space, their time, their work and their days, humble or amazing.

When Dominique Serena asked me to be involved in this new incarnation of a place that had shaped and transformed me, within the scope of the transparency of the floors and stairways, I could only be modest and reverential, not adding any personal traits to the treasures, container and content that the Museon represents. Instead, a simple act of gratitude and love, of recognition and almost piety.

The concept of a collage, a patchwork, quickly emerged, like a link between the paradoxical mosaics that make up the Arles region and the compilations about which I am passionate. Four floors, two walls, two sides of a region, two faces, from the north to the south of the city, between the Alpilles and the Rhône Delta.

To honour them, I tried to erect two majestic monuments to them, like two totems developed from the museum’s objects and gems that have particularly helped to shape me, or with which I am quite simply forever in love. 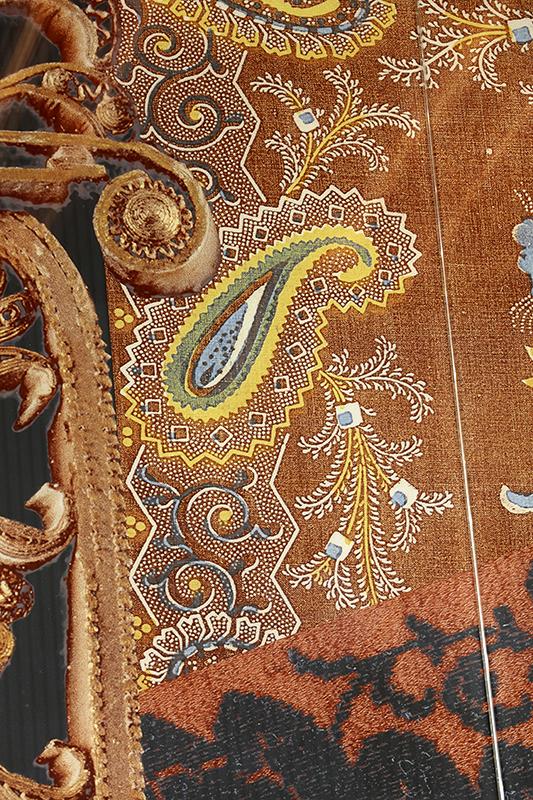 A more radical, more rustic, more natural side, bringing together the tools, amulets, ritual objects and popular traditions between the Petit Rhône and the Grand Rhône, slightly naïve, sometimes primitive expressions, in a concious confusion of the floors and a palette of understated tones, those of wood, the earth, metal, the Camargue.

And, for Provence, a more luxuriant, more colourful, “sophisticated” side, with a kaleidoscope of sacred objects, straw and gilded wood, crafted velvet ribbons, Indian scarves, fabrics and lace, embroidery, paintings and portraits with extensive, warm, rich ranges, also treated without concern for proportion or chronology.

These two glass “walls”, printed with the most faithful and exact of definitions, subtly backlit, framing the weightless stairways and concealing, in addition to the lifts, the entrance doors to the rooms that they help to reveal, while allowing their colours to linger on the ground, where they spread out in rays of rainbow colours.

To end, I would simply add that it has been a delight and an honour, a gift of the rarest destiny to be invited to perpetuate a temple of my childhood, to accompany the rebirth of a “friend”, a beloved “elder” who has created you, shaped a culture, a taste, revealed a kingdom. My heartfelt thanks.

On 3 June 1653, the Jesuit fathers who had invested in the Laval mansion began building their church thanks to the donations of François Vautier, Chief Physician to Marie de Medicis, then Louis XIV. The fathers also benefited from many other donations for their chapel which was consecrated on 19 February 1661. However, it remained unfinished, only having side chapels on one side aisle. The Gothic-style, archaistic wooden ceiling dates from 1737. It is vaulted with ribs and hanging keystones decorated with the coat of arms of Marie de Grille d’Estoublon (cricket), widow of André Aube de Roquemartine (bear) who financed it.

The main building contains the high altar in polychrome marble and the retable created by Antoine Guibert in 1679. The original centre painting, now missing, depicted Saint Joseph, patron saint of the chapel. It was replaced with a Descent Of The Holy Ghost On The Apostles probably dating from the 18th century. Two monumental statues of Jesuit saints frame this central painting: Ignatius of Loyola, founder of the Society of Jesus and Francis Xavier, founder of the order’s missionary activity. 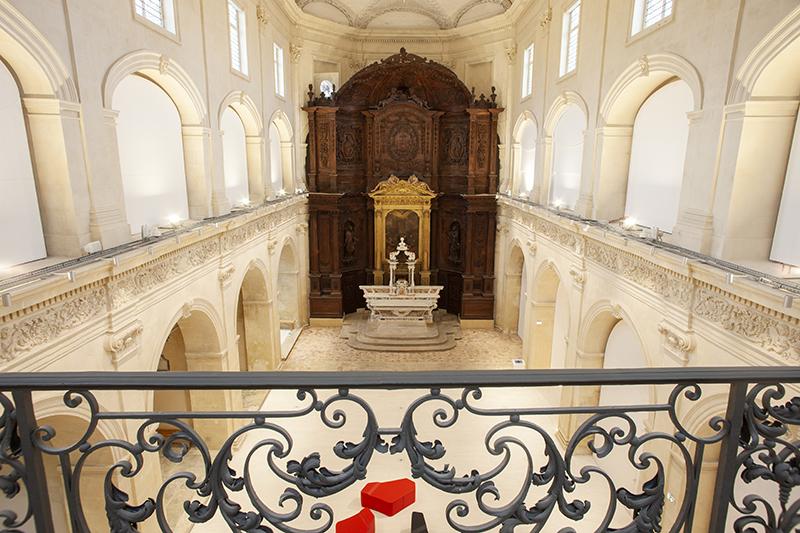 When the school became a municipal school, the chapel was still used but the two buildings were no longer linked. In 1873, it was decommissioned and its congregation transferred to Saint-Trophime. In the early 20th century, it was abandoned (even becoming a store for potatoes and frozen meat) until 1936, when Fernand Benoit transformed it into an archaeological museum of Christian art. In 1995, the archaeological collections left the chapel and were transferred to the newly created Museum of Ancient Arles.  The chapel then became the access point for visiting the cryptoporticus, underground galleries built by the Romans, before recently rediscovering its original link with the old school, now a museum. This will be the space for temporary exhibitions at the Museon Arlaten.